skip to main | skip to sidebar

The Joe Bonham Project
an exhibition curated by James Panero

______________________
BUSHWICK, BROOKLYN – Storefront (16 Wilson Avenue, Brooklyn) is pleased to announce the final installment of its ambitious summer exhibition schedule featuring THE JOE BONHAM PROJECT, an exhibition organized by guest curator James Panero. Post 9/11, the exhibition brings together the work of wartime illustrators featuring portraits of injured US service personnel by members of the International Society of War Artists and the Society of Illustrators. These works are documentative, accurate, and gripping, yet offer a sensitivity and awareness to the causalities and sacrifice of war.

The show opens with a reception, Thursday, September 1, 6-9PM and will be on view through September 18. For more information, contact Jason Andrew at 646-361-8512 or visit www.storefrontbk.com

THE JOE BONHAM PROJECT represents the efforts of wartime illustrators to document the struggles of U.S. service personnel undergoing rehabilitation after traumatic front-line injury. Formed in early 2011 by Michael D. Fay, the Project takes its name from the central character in Johnny Got His Gun, Dalton Trumbo’s 1938 novel of a World War I soldier unable to communicate with the outside world due to the extent of his wounds. Scheduled to coincide with the tenth anniversary of the attacks of September 11, the exhibition will mark the silent sacrifices of American soldiers in the ensuing decade-long conflict.

James Panero is Managing Editor and art critic at The New Criterion and writes about art and culture for several publications. This is his first curated exhibition.

A SELECTION OF WORK SCHEDULED TO APPEAR IN THE EXHIBITION:

Sgt Than Naign by Robert Bates

War artist Victor Juhasz is heading to Afghanistan in a couple days. Read his thoughts as he heads out for his first bona fide combat art trip at his Drawger site.
Posted by mdfay at 4:08 PM 1 comment:

War Artist Richard Johnson is now in Afghanistan. You can check out his art and dispatches via Canada's National Post. Richard is posting at their Kandahar Journal blog.
Posted by mdfay at 6:42 AM 1 comment: 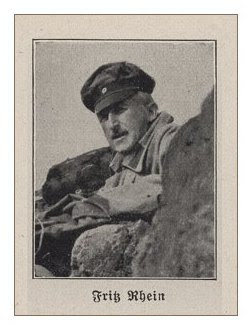 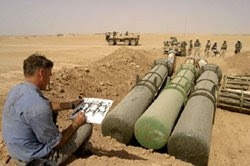 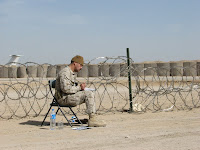 Art and war have been fellow travelers since time immemorial. From Paleolithic cave drawings of spear wielding warriors to Otto Dix's apocalyptic WWI paintings art has tried to both visually record and come to grips with the intense reality of war. Many nations during the 19th and 20th centuries fielded official war artists. Equal numbers of newpapers, especially during the Crimean and American Civil Wars, began sending forth "specials" to sketch and photograph what they saw. Often both official and civilian war artists shared a core mission; help the folks back home understand what their sons, daughters, brothers, uncles and fathers were enduring far from home. What is remarkable, almost universal even unto this day, is the consistancy with which artist who've gone to war record not just the violence of combat, but the humanity of the combatants.

Few human endeavors have produced more stereotypes than war. Yet those of us who have intimately witnessed its ravages, have also experienced its complexity. A complexity which, though not easily captured, demands articulation. Wars are nuanced events with moments of terror juxtaposed with times of easy comradery. During war, the human face, perhaps the richest source for art, is presented in ways that it simply cannot when framed in the relative peace and safety of the homefront.

Today there is a small cadre of working war artists. Some of us are officially sponsored by a particular nation's military, others find themselves employed by newspapers and a few have gone to war as independents. We are perhaps the last analog people in a digital age. In an age of instant imagery some have found the slowed vision of art going off to the uncertain world of war reassuring.

There is also a large number of living war artists. A significant number of them have gone on to fine art careers of great renown. They too will be included in this new society, The International Society of War Artists.
Posted by mdfay at 4:14 PM 7 comments: